How hateful you've become. It's the day before the deadline for the GRA consultation. Maybe you're reading this in a few years time and you don't know what that is - you don't know what anything is. The whole world has been sucked out and paralysed and you're not capable of knowing anything. No. That's now. Hostile subject, you don't know anything at all. We are left with almost nothing. Hatred is not knowledge, it is idiot passion. It burns in me. The reason this feels strange is because I barely know what any of it means anymore. It feels like they're having another one of their elections which have collapsed onto us over and over again. Even that last one where that desperate little weapon called Jeremy Corbyn made a bit of headway. Everything that's happened in electoral politics for the last ten years has been a hideous repulsive disgusting ridicule of human subjectivity. Actually, twenty years, actually, more or less forever, and more or less almost nothing. And so here I am in a horrible state not dressed yet, working away at the thing that occupies every minute of my entire life and often takes me closer to universal central point, making me worse, being told by my financial ombudsman (I don't know what that is) that I am not working and that I need to be working, and I look at social media where loads of gorgeous people are doing their absolute best to accommodate people who are like me, or a bit like me, or not at all like me, or a little bit to the right if you squint but almost like me or who are almost nothing like I am or who are nothing like you and I also are, or who are a bit more than almost nothing, or who are almost nothing like almost nothing, asking things like "how can I be a good ally?". I don't know what this is. A nebulous vocoder. Fuck you, ally. You are as bad as rotten soil. That's not even an insult. I am the thing rotting in the soil and you are the soil. "You are my dust" I read somewhere. It's not even going to accumulate into some wonderful moment if it goes well, the GRA if reformed as proposed will at best attempt to save a few hundred lives and what are a few hundred lives now when we are almost less than nearly nothing, after all of this? How hateful I've become. It happens from time to time. I try to resist and curtail it but it's so difficult. To have seen magnificent humans brimming with love deliberately fall out of this world and to have even a vague understanding of the mechanisms that seem to be sustaining it against so many incredible possibilities - rendering the better good utterly impossible, it's hard not to recourse to hatred... It's been a couple of hours since I wrote that. Now I'm a little calm. Or exhausted. The thing about this moment - the thing, is that it's one of those questions that I can't believe we're even asking. Around that questions is a swarm of grieving fear being clutched tightly in the fists by opinion journalists and people who've been thrashing against us obsessively for years. Suddenly they're walking under the banner of "legitimate concern". We just want the noise to stop. That's all I can hope for at the moment. I'm sick of human lives being at the centre of violent questioning. I'm sick of your pretend intellectualism. I'm sick of your stirring. There is no such thing as a trans poetics. I'm sick of the great big old world keeps on turning. There is a tongue in the neck. There is rotting soil. Moments of collective healing. What. Slow death.


Slow death, now as in gently they made
a centre, this hazing remedy
hostility recognition act
legitimized until no moving;
slow death, slow death, slow gridded death, by
what. How hateful you've, no not "hateful"
exactly more like a gentle grind
called love, exactly. What. Reduced us
to releasing wasps in their houses.

MARTIN: I am Martin Costello - Hater of Paedophiles. For the last few months my daughter’s been softly tugging on my arm asking about higher education. Obviously I’m a very busy man what with leafleting and the little plastic gloves they use cost a penny each but we could be waste them on or at maybe ten pounds a glove! etc. For a while I paid it little attention thinking this was a soft phase which would pass her by and maybe leave her feeling really stupid when it all turns out to be make believe. Unbeknownst to me, however, she’d sent off UCAS applications. She received three unconditional offers which I was bloody well expected to be proud about when the little rubber fingers not fit properly a bloody disgrace at ten pounds each a glove! So I did my homework. I’d heard all about these “Universities”, snowflake replicators. Parsons Extruded Remoaners. I checked the list of courses available and to my surprise there wasn’t a single one listed as a “Social Justice” course. Perhaps Sargon’s petition had actually worked! Next I checked to see if there were any bloody well Paedos. There were two convicted staff members. Doddery old white professors. Not much of a grooming gang if you ask me. I ignored them. For once I felt my conception softly inch itself towards the door like grandparent fingers unwrapping my fingers, peeling them out of the little plastic gloves they have. My daughter. My deal. My taxes. I left myself at the door and flew back home with the leaflets. The sun let itself shiver through the curtain. My heart rate monitor. No daughter of mine. No.

The above is from a long theatre / poetic monologue piece I'm working on. The working title for the performance is "You Will Live Today", with the internal monologue under the title Hopeless Vibrato.

There's a new Binnsclagg E.P. here for you to listen to, if you like that type of thing: Binnsclagg - Fly Away Peter Fly Away Paul

Support me with CASH
Posted by two torn halves at 06:52 12 comments:

There's loads of exciting published matter that you should go and buy immediately.

First of all look at these wonderful objects from Boiler House Press! 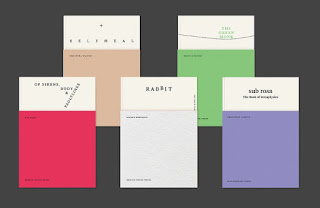 I may try and review these as a set. You can pre-order them here (out on November 5th): 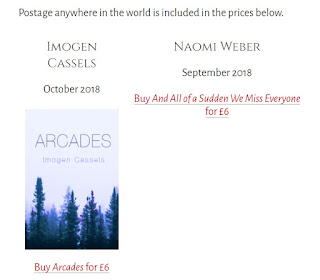 Stoked to see new work from Imogen Cassels and Naomi Weber. They can be got here:

I have a new book out on Pilot Press. Also any day now you'll be able to get A Queer Anthology of Rage. Here:

There's a new Press in town run by three absolute Baberaham Lincolns. A book is out by Calliope Michail, which is excellent. This is a press which supports writers and has good politics. It is here:

I've made a Patreon page because I have very little money at the moment but I'm working really hard and I want some new cardigans. If you'd like to support me in my life you can do so. I will send you treats and stuff.

So the TOTALLY gorgeous poet known under Francis Crot, Pochahontis Mildew, Axle Prose, Jowself Walton etc. has only gone and landed a job at Sussex which mean's he's in the same town as me. The other week a group of us had a little intimate reading in the upstairs of our local and it was GORGEOUS. Totally. So like, we should do another but with Walton in the room.

OMG me and Joe Luna are both at the University of Surrey now! Surrey is known as Britain's Patio!

Keston Sutherland and Stephen G. Rhodes have an exhibition on in the back of a vape shop on Western Road in Hove. It's right by me and Dolly's house so if you go give us a dot at verityspott@gmail.com and maybe we can go for a cup of tea. Here's a like to that: We Get it You Vape

Come to the next Hi Zero too. Hi Zero 64. There's going to be a Nat Raha, a David Grundy and a Gizem Okulu. It'll be a madness!

Speaking of which I'm a bit worried that Ally Law might be in prison or something. His YouTube account has been pretty quiet of late. I know he's meant to be on tour doing Madnesses every day. Lord be with you, Ally and your pals.